Below is an excerpt from SOUL BORN. It is the prologue. It introduces Tala.  Enjoy!

Soul Born is available in paperback, kindle and nook formats.


The snap of a stick echoed in the ears of the young elven woman as she fled through the murky midnight forest, her pale violet eyes like those of a predatory bird, searching and scanning her surroundings. In this chase, however, she was the prey.

Two days ago, by sheer misfortune, Tala had crossed paths with a hunting party of her people’s greatest rivals— reptilian beast men. The alligator-headed deinosuchians were on the brink of extinction after many summers of bloody conflict with the elves, making them even more dangerous when encountered.

After having run for two straight days, Tala had exhausted all of her people’s tricks to escape pursuit. The deinosuchians were closing in on her.

Tala ran through the forest, no longer making any attempt to cover her tracks. She was so tired her mind convinced her that there was danger in very shadow and behind every tree.

She had lost everything: her belongings, her friends, and her family. It seemed fitting that, on this night, she would lose her life too. Dry-mouthed and thirsty, she ran in the direction of a lake, having spotted the glitter of moonlight reflecting off its surface between the trees.

She knew the deinosuchians were close; she could smell them—the scent of decaying flora coated their scales. Nevertheless, she stopped, kneeling by the lake to drink. After gulping a few mouthfuls of the earthy-tasting water, Tala froze and spilled a handful down her chin. She remained motionless, afraid that even a breath would alert her hunters.

Through the willow trees that encircled the small lake, she heard several crunches echo from the opposite shore. Tala had never overheard a deinosuchian speak, but her tribal elders recounted their language as a collection of hissing sounds not unlike a snake, with tongue–clicks added for emphasis.

The young elven woman stood bit by bit and backed away from the water, one foot at a time. Suddenly, the bushes in front of her spread open and out lumbered one of the hunters, his back hunched, and his dorsal spikes flared as he moved; he was about to attack.

Tala whirled around to sprint away from her assailant but came face-to-face with two more deinosuchians who had crept up behind her in silence.

Her shriek of terror was cut short when something small and round hit the back of her head. She pawed through her yellow-green hair until she found a wet spot and her vision began to blur the moment she saw the crimson on her fingertips.

Unable to control her legs, she fell to the soft ground near the edge of the lake. Able to roll over, she stared blearily into the black sky as the deinosuchians approached her. She heard them hiss and click at each other in a rhythm that she imagined was filled with joy. Why wouldn’t they celebrate? They caught their dinner.

Out of the corner of her watering eye, Tala saw the three-clawed toes and dewclaw of one of the deinosuchians settle into the earth beside her head. In desperation, she wrapped her arm around the reptilian beast-man’s scaly leg. While the strength drained from her, she attempted to knock the hunter backward, but her efforts only earned her a jarring blow to the side of the head. The impact of the deinosuchian’s wooden staff left a metallic taste in her mouth and made the world spin.

Few lived to tell the tale of the deinosuchian’s feeding ritual, but one elf in her tribe had: a man named Arol. The elder had spun a tale not unlike the one she was living now. Chased, wounded, and caught: the hunters bit off his right arm before he was rescued.

No one will save me. These beasts… They are going to eat me alive, piece by piece.

Tala squeezed her eyes shut, aware that even if she had kept them open, she would not have seen much more than a blur. She may have been powerless before her attackers, and too damaged to fight, but that did not mean she was willing to watch herself be consumed.

When the edge of a stone blade cut into her hip, her body tensed up. The end was coming—the deinosuchians were stripping her of her clothes just as Arol had described in his horrifying tale. Her sense of defenselessness became crushing when her skirt was torn from her body. The thought of one of the deinosuchians sinking his teeth into the meat of her thigh sent a wave of terror through her body, and it escaped in a scratchy scream.

A cold, clawed hand brushed against her face and shoved something dry into her mouth to silence her. She gagged, familiar with the taste of leather—no doubt a scrap from her own skirt. I don’t want to die.

Claws pierced her blouse and dug ever so slight into her skin before they scratched themselves across each of her breasts and tore away the last bits of her attire. She tensed, but her body vibrated with panic.

The same fear that sealed her eyes now opened them. Her surroundings were blurred and dark. The moonlight, what little pierced the canopy of trees, reflected off the deinosuchian’s chest scales; he was inches above her.

Something warm and sticky struck her leg, but before she could look, she felt something else smack against her chest and move across her collar bone. Tala gazed down her nose and was met with the sight of a long, thin, pink tongue attached to her nude body, trailing saliva.

She tried again to struggle but two great weights pinned her arms down. Her eyelids fluttered as she fell into a swoon, but then an ominous, stern voice cut through the darkness and awakened her dulled senses.

“Leave the girl alone, deinosuchians of the Gar-hut-tu tribe. The elf will not be your meal this evening.”

Am I rescued? One of my former tribesmen come to save me?

“Leave now and seek your sustenance elsewhere. This is your final warning.” The female voice spoke loud and clear.

Free of the weight on her arms, Tala sat up and blinked her eyes slowly. For a moment, all she saw was the darkness of night painted over the trees and bushes near the path; but then, all shapes and colors washed away in the most brilliant flash of pure white light she had ever seen. When her eyes adjusted, she watched one of the deinosuchians stumble into view. Then, slowly, the creature moved and hissed in agony as his body crumbled like arid soil and blew away in the wind.

The young elf turned her head against a formidable spike of pain in her neck and laid eyes on the owner of the powerful voice. “Y-yes?”

“My name is Drae’Qu and I have been waiting for you.”

Posted by kevinjamesbreaux at 1:02 PM No comments: 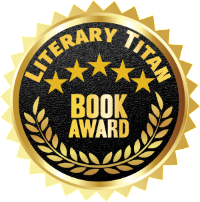 Literary Titan awarded it GOLD for January, listing it among the best books reviewed in the past month. See here: https://literarytitan.com/2019/01/04/literary-titan-book-awards-january-2019/

I am very excited and proud.

The publisher, Azure Spider, and I worked hard on this new edition of SOUL BORN. I want the publisher to see it was worth it. And with a new 5 Star Review and Award, already in 2019, I think it is making its mark!

Posted by kevinjamesbreaux at 12:07 PM No comments: